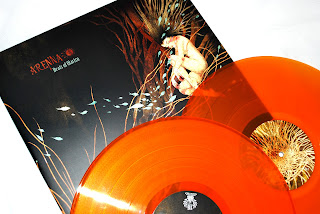 I had written up a different entry for today, just something a bit heavier being as the last few reviews had been quite mellow in the grand scheme of things. But no but 5 minutes ago I was woken by the postman knocking at my door and bless him he came baring gifts not bills. Something I've spent weeks tracking down and waiting for. I had wanted to get this review up a lot earlier, ideally about a day after the album was actually released, but I wanted to hold out and get good vinyl review up for it.
So here we are, Arenna - grimy stoner space rock quartet from sunny old Spain. Not including their 2007 demo this it the guys first true release and good god they've done it in style. Gorgeous gatefold art work and lovely orange wax. But to be fair what else would you expect from Nasoni Records, the fellas who gave us, Electric Moon, The :Egocentrics, The Machine, Sula Bassana and the mighty Wo Fat. All of which had amazing vinyl renditions of their albums courtesy of this company.
From the outset this album strikes of being mostly ambient and psychedelic, a pure space rock style affair but that would only be half right. All those elements are present sure, but these chaps sure can write a huge doomy riff or two. The opening track Morning Light takes just a matter of seconds to storm into the album with a slow gritty churning guitar noise worthy of being compared to the likes of Sleep or Grief. Its a brave and bold clash of genres that Im sure you happy what ever your prefer style of music. Theres really something there for everyone, so much so that Im desperately trying to whittle down the 'For Fans Of' selections from about 50 to 5. I could easily drop bands like Down, Orange Goblin, Dozer, Sungrazer, Elder, Nebula and Black Pyramid into here.
Its like The Sword, White Hills and Yawning Man all got together a in a Desert Sessions style outfit and threw down an hours worth of material. A truly blinding debut album from a bunch of extremely talented guys, and when you throw in mixing duties by the sludge messiah Billy Anderson (who's worked with the likes of Eyehategod, Neurosis, Alabama Thunderpussy and Weedeater to name just a few), well something special was always going to be on the cards.
If you've liked even just one band that I've reviewed on here over the last 5 months or so you must check this album out!