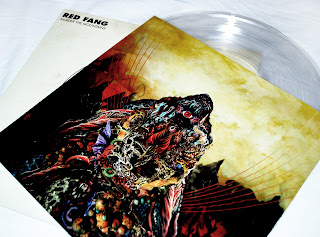 Its always great to hear a band progress and improve with every new recording and Red Fang have done just that. Mind you, I did love their self titled debut. The no bullshit southern style stoner metal was awesome and with the addition of quite possibly the greatest low budget music video of all time for the opening track 'Prehistoric Dog'. But sometimes progression can be somewhat faked, some times bands can try to just get away with wangling a good producer, so with the right tweeks here and there the illusion of a good record can be passed off to the masses. Hell, you only have to look at Metallica in recent years to get the idea. Fortunately thats not the case with these guys. Yeah, someone somewhere has clearly forked out a fair whack for a decent studio and mixer, but it doesn't stop there. You can really tell the band have worked hard on their new material and improving their sound.
For the most part they have slightly shied away from their original southern groovy style riffs, going for a more somber slower style. But when you listen to the tracks Number Thirteen and Hank Is Dead you can tell they haven't completely lost touch with their roots.
Everything sounds bigger and more layered than before. Almost like the guys have grown up and lost their tongue in cheek side. That may sound like a complaint but its really not. Swaying towards a more metal than stoner side, its a great album from start to finish, but it may not appeal to everyone who loved their first record.
• Label: Relapse Records
• Pressing Info: Limited to 1081 copies - 81 Transparent Maroon, 100 Clear (not availiable to the public), 300 Purple Marble, 300 Green Marble, 300 Black
• Price: £10 - £16
~ Jay
For Fans Of; Doomriders, Mastodon, Red River Revival, My Unkle The Wolf, Elder
Website • Myspace • iTunes
Murder The Mountains (320kbps)