Straight From The Valleys... 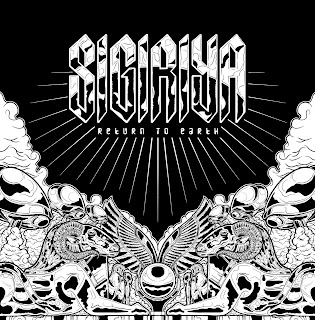 Now this is where our Johnny Morrow/Iron Monkey tribute draws to an end. Its been a good (nearly) two weeks and hopefully any of you out there who weren't too familiar with the work are now a little wiser. The feed back so far has been cracking so hopefully we've done the great man/band proud.
Right, so how many of you guys remember Acrimony?... Awesome Welsh band that had a good 10 year run from the early 90's to 2001. They only released two full length albums but did have a fair few EP's and some nice splits, most notably their final one with Church Of Misery... Anyway, this is what formed from the ashes of this great, yet highly under appreciated band.
I will confess that I had only recently heard of them and only in passing, but as it turns out Sigiriya formed just a couple of years ago and have been slowly working on material, doing the rounds and are poised to release their first full studio album. The guys were also kind enough to get in touch with me and send over a copy of the new release and their blessing to put a track up here... True gentlemen!
I wont dwell too much on the band themselves, as their bio pretty much says it all. So in their own words...
"Beneath the soil of a Welsh valley a heavy metal life-force regains strength: rising from the ashes of stoner doom merchants Acrimony, Sigiriya is born.
Eight years after the demise of Acrimony, guitarist Stu O’Hara, bassist Mead, drummer Darren Ivey and vocalist Dorian Walters have reconvened. Not wanting the limitations of reforming a project long dead to them, Sigiriya brings a fresh take on their trademark monolithic heavy groove. While Acrimony hailed from the temples of deepest space, Sigiriya come from the earthy depths, bringing hefty, tremor-inducing sonics that pay homage to the riff.
Time served in the likes of Iron Monkey, Helvis, Dukes Of Nothing, Black Eye Riot, The Nine and Yeti have only added to their thick output, giving the foursome a more dynamic, meaner, leaner, earthier approach, which has developed an intense dirty sound with elements of boogie, classic rock and even crust. Taking their name from the mystic ‘throat of the lion’ rock in Sri Lanka, their rumble has been moving the Black Mountains of their homeland and will soon be moving the tectonic plates of the earth. To borrow a phrase from their former outfit: ‘Bong On, Live Long…'"

Voila!
Now hit up the link below for a taster of the album and watch this space for a review of the vinyl release which is (fingers crossed) soon to be in the pipeline... Sweet!
Also keep and eye out as these chaps will soon be hitting the road around the UK and possibly playing at a venue near you, and if you happen to reside in the London area in August they will be playing with our friends Dopefight at the Unicorn in Camden.