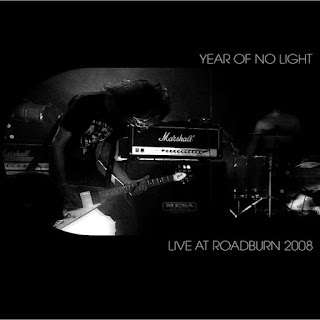 Ah, Roadburn. Ride with the Devils’ spiritual home, and a pretty good reason to live in Holland, as if the liberal approaches to drugs and prostitution weren’t enough. For those that don’t know, Roadburn is an awesome annual festival putting on the best of stoner, sludge, doom and post metal. Recently, they’ve even started putting out CDs of some of the sets. See the excellent Neurosis set from 2008, for example. Well, now it’s the turn of Year of No Light, French post-metal types that took the Isis blueprint and twisted it into something beautiful with their debut ‘Nord’. This record is particularly interesting, as the set took place prior to the departure of singer Julien and their move to singular instrumental glory as typified by 2009’s ‘Ausserwelt’.
To the tracks though – the production is incredible for a live record, the rhythm section given real weight, guitars sounding huge, and vocals sounding as raw as all hell. Tracks like ‘Traversee’ actually slightly improve on the versions on ‘Nord’, picking up the pace slightly and sounding somehow more brutally raw than the studio produced versions on the album. The band are tight, balancing sombre psychedelics, crushing sludge riffs, tortured screams and postrock touches to devastating effect, most notably on ‘Metanoia’, originally to be found on the Rosetta/Year of No Light/East of the Wall split. It’s an absolutely epic noise that demands attention, especially when that brutal rising progression runs headlong into the simply massive ‘L’angoisse Du Veilleur De nuit D’autoroute’. I get goose pimples listening, honestly.
Jewel in the crown is last track ‘The Golden Horn of the Moon’, a live collaboration with Fear Falls Burning, a drone led shoegaze epic, with washes of feedback and distortion building relentlessly for over 14 minutes. It’s a near perfect way to end the set. Awesome.

For Fans Of; Isis, Cult Of Luna, Cave In, No Anchor, White Hills