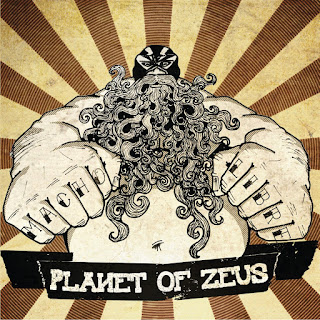 Again this was yet another band that kind of passed me by for a while. The name had popped up here and there on and off but it was only when I was getting ready for a night out on the tiles at a friends and the demo for their track 'Leftovers' came blaring out of his computer that I began to do some proper listening. I promptly downloaded the first album; Eleven The Hard Way and was instantly hooked. But unfortunately this was still about a month or so prior to the release of this record, which a few friends of mine had been lucky enough to hear a few rough tracks of and described as 'blowing the first album out of the water'. Much to my relief I managed to blag an early copy and its barely been of my stereo since. That sweet southern metal guitar twang and dirty, gritty vocals instantly grabbed me once again and with seconds my head was nodding and feet were tapping. The instant feeling of being gutted that I hadn't got hold of any of their stuff sooner quickly gave way to foot tapping joy as I trawled youtube in search of clip after clip of them. I must have watched about 8 or 9 videos before I actually figured out that these guys weren't from the US. I know that sounds pretty amateur but if you've heard them before you'll understand and if you havent you soon will. They sound like they should be locals at SXSW, not hailing from Greece. Their sound echos that of the likes of Maylene or Red River Revival. But dont get me wrong, in no way are these chaps ripping off anyone else or posing as a poor mans immolation. Macho Libre is utterly riddled with quality riff after riff and it certainly doesn't hurt that their vocalist Babis has one of best stoner rock/southern metal voices you'll ever hear. Totally raw and gravelly yet still skilled enough to successfully pull off a wide variety of peaks and styles. Not bloody bad for some who's native tongue is that which he sings in..
So what should you expect from Macho Libre? Well if you haven't guessed already, pretty much balls to the wall, Texan style southern rock. But in the same tone they're no one trick pony either as they're perfectly able to nail some chilled out tracks too 'Unicorn Without A Horn' and 'Hazelnur (RIP)' are blissfully mellow and strangely reminiscent of a mix of Pink Floyd and some of the instrumental Hendrix tracks he recorded. Kind of in the same vein of Black Sabbath's 'Planet Caravan'. But yes, the heavy rock style is definitely where POZ really do excel. If this album doesn't make you wanna jump in to a Dodge Charger and tear round at high speed jumping over barns and police cars then there's something seriously wrong with you! Best review of this record actually came from a friend of mine when he summed it up in this short sentence; "I swear, you can take pretty much any track on here and edit it over clipped footage of Dukes Of Hazzard and it works perfectly... every time!" Now, if you haven't been convinced after that you never will be.