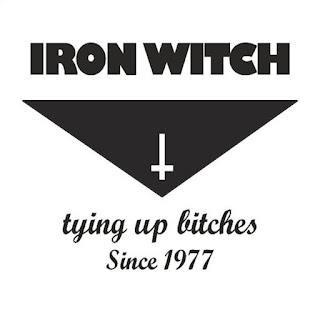 Something a little heavier for you now ladies and gents. How does a little bit of grimy punk influenced sludge sound to y'all? Good, well I present for your consideration, hailing from Liverpool, England; Iron Witch. Basically this is Nola style dirty sludge done by Scousers... and done bloody well!
Right, there's an absolute shed load of sludge bands doing the rounds throughout the UK alone, but the thing is, and I dont like to criticise too much here, the vast majority of them are pretty shoddy. They seem to think that they can get away with pretty much anything quality wise and just pass it off as 'sludge'. It's like trading volume over talent, but you can't do this. It just doesn't work. You don't have to be a genius to work this out either, just look at the pioneers of the genre; Eyehategod, Iron Monkey, Bongzilla, Soilent Green, Acid Bath... etc etc. They all had a certain groove to them. It doesn't matter if it's buried under excessing fuzz, it's always there. So if you cant write a good riff, don't bother trying to start a sludge band. It's that simple. The other thing you need to know about this genre is that 99% of the bands have some kind of punk roots or heavy influence. Whether it's Black Flag or GG Allin it's there somewhere. So now thats out the way I'm glad to announce that Iron Witch clearly understand this simple formular and execute it with brutal conviction. It's only a demo but the quality is evident. Evident and more than worthy to be placed on the roster of such labels as Southern Lord or Phil Anselmo's latest project The Housecore Records. That may seem a bit of a bold statement but you give these guys a listen then make you're own decision.
Iron Witch have firmly cement their name with the likes of other UK acts such as the awesome Dopefight, Hang The Bastard and Dead Existence that are currently on the scene and dominating it with their own new generation of sludge and doom. All bands that deserve a whole lot more attention then they are actually getting. So with that said, shoot on over to Witch Hunter Records and see what other little gems the guys have dug out for your listening pleasure.