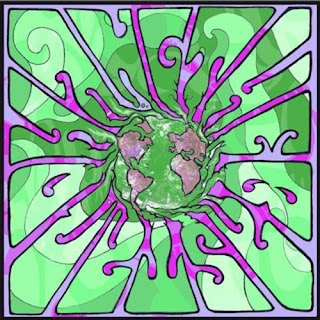 As you can probably tell by their name alone, London five-piece Hang The Bastard aren’t the type to pull any punches. It may be two years old now, but their brilliant sludge fuelled debut EP Raw Sorcery set the foundations to build upon for their first album, the recently released Hellfire Reign.
As far as first impressions go, Raw Sorcery has that chaotic experience down to an absolute tee. The relative serenity of the first minute and a half of the opening track ‘Failed Harvest’ truly is the calm before the storm. What you get after that is an unstoppable, unrelenting tirade of epic breakdowns, violent vocals and riffs straight out of the Sabbath back catalogue. ‘Pillage Your Village’ showcases the slower, sludge style that is more akin to Soilent Green and Eyehategod, whilst ‘Awaken Ye Heathens’ and ‘Oblivion’ provide the energy and harsh screams to make sure the EP finishes in a typically brutal fashion.

The beauty of Hang The Bastard, is that you cannot pigeonhole them into a single genre. You can hear the riff-heavy influences of Sabbath, the thrash-heavy influences of Slayer and the Southern metal influences of Down and Eyehategod throughout, which all culminates into a violent masterclass in crushing eardrums.
Off the back of their first full length release (Hellfire Reign) and having played over 200 shows throughout Europe in the last 18 months, it’s safe to say that Hang The Bastard are well and truly here to stay.