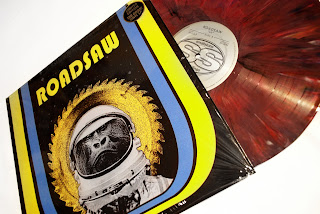 I've cut in a little here because we were due to give you a nice shiny new vinyl review and just yesterday this lovely little record finally appeared on my door step and I've been waiting to get this up since it was first released. So here we go... Roadsaw - veteran hard rockers with a distinct southern twang and swagger. Sounds good right? Well it is, and just what we're looking for here.
The first I heard of this bearded four some was when I was trawling Smallstone Records for new and interesting vinyl releases. From first glance this appeared to be a debut but these guys have been churning out their particular concoction of southern stoner rock for nigh on 18 years. With this revelation in mind I back tracked and checked out some of the earlier material just for a bit of a comparison. Time has seemed to change these guys a little. For those of you familiar with their previous work you'll be glad to know those trademark catchy riffs and hooks are back in full force. But as for the over all sound and tone, everything feels a lot more smooth and polished. For all of you not acquainted with them, they're a bit like a slightly slower tempo Orange Goblin... In layman's terms.
Recently playing SXSW the Massachusetts quartet clearly had a trek and a half on their hands to join the rest of the awesome Smallstone show case. Sharing the stage with Sasquatch, Dixie Witch and blog favourites Lo-Pan, it really makes me wish I lived bloody closer!
Never the less, if you haven't already go give these guys a listen and swing by Smallstone Records on your way to find some fantastic vinyl releases!
• Label: Smallstone Records
• Pressing Info: Limited to 40 Purple/Blue Marble - 100 Clear Blue - 100 Black
• Price: £15/$20
~ Jay
For Fans Of; Orange Goblin, Naam, Planet Of Zeus, Asteroid, Clutch
Myspace • Facebook
Roadsaw (320kbps)