Gentlemans Pistols - At Her Majesty's Pleasure (2011) 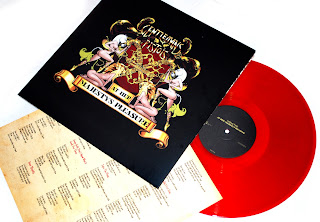 Recent addition to my vinyl collection here. Having been browsing the shelves of my mates record store I spotted it I had a bit of a flash back. I could have sworn I picked it up when it came out a few months back... alas some how I forgot. I know, shame on me. Anyway, better late than never so lets crack on with the review.
Gentlemans Pistols have been doing the rounds since about 2003, they've cracked out a couple of & inches but didn't get around to releasing a full studio album until 2007. They then waited until now to give us another offering. Thats not a huge amount of material for nigh on a decade, but lets not judge. Besides, its quality not quantity that matters and luckily this happens to be the guy's ethos. Plus when quality is matched with a great resonating classic rock style, well that does just make my day. I've always professed that I was born 30 years too late. I missed all the best stuff by a fair few years and the 80's weren't too kind to the whole rock scene - too much hair spray and tight trousers/lycra for my liking. Much like today unfortunately, but at least today we have these guys doing their part in keeping that classic sound alive without coming over too cliché or cheesy. This album is full to the brim with what are best described as homages to some of the greats. There's some clear inspiration from the likes Zeppelin, Sir Lord Baltimore, Atomic Rooster, Steppenwolf and even a little early KISS to name just a few. The latter there can be heard so evidently in the track I Wouldn't Let You, which I guarantee will take no more than 5 seconds to remind you of Love Gun. Nothing wrong with that if you ask me, I'm all for sharing your influences and reflecting them in your own work. Sometimes bands can take it too far and just blatantly just rip a classic off but fortunately Gentlemans Pistols seem to have such an eclectic range of inspiration that every track tips it's hat towards another band's archive of work. It's great to hear and also a bit of a rarity. In fact the only record I can think of that was so diverse in this kind of way was Wolfmother's self titled debut. Just like the aforementioned it's also jam packed full of memorable foot tapping riffs and licks. A lot of which have a distinct southern sounding undertone with the tracks like Peeping Tom and The Ravisher have a certain touch of Skynyrd and Mountain about them.
If you're a lover of the 70's and the pure awesomeness that the decade positively exploded with then I urge you to pick up this album, and what better way than on lovely vinyl!...