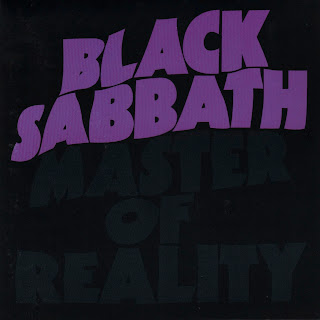 The early 70’s were a busy period for Black Sabbath. In the space of five months from February 1970, they released two of the most influential records in the history of heavy metal, in the form of their self-titled debut and Paranoid. The latter spawned the instantly recognisable ‘Iron Man’, ‘Paranoid’, ‘War Pigs’ and ‘Planet Caravan’, and in the process seemed to be blazing a trail for other metal bands, even to this day.
However, Master of Reality – released in July 1971 – showed that Sabbath were not content with churning out the same riffs album after album, as it’s an altogether darker, slower and sludgier experience. The opening coughing loop in the intro to the fantastic opening track ‘Sweet Leaf’ sets the eerie precedent for the entirety of the rest of the album. ‘Lord of This World’ follows in a similar vein, with a typically sludgy, patient build-up, before breaking into driving riffs and breakdowns that almost became a trademark for Sabbath in their first two offerings in the previous year.
Whilst Sabbath also show their versatility with ‘Solitude’ – in which Tony Iommi swaps his guitar for the flute, and ends up creating eight minutes of music that Jethro Tull’s Ian Anderson would be proud of. However the jewel in the crown of Master of Reality is the sensational ‘Children of the Grave’, a masterpiece which can do nothing but lure you in within the opening chords. Add Bill Ward’s unconventional drumming, Geezer Butler’s doom-laden bassline to the mix and Ozzy’s shrill vocals, and you have a definitive stand-out track from the album.
The album finishes on ‘Into the Void’, which has shades of ‘War Pigs’ about it, but nevertheless displays their talents with a plethora of slow and heavy riffs early on, before the wonderful switch of tempo and the guitars soon come crashing in. It’s also worth noting Kyuss’ superb cover of ‘Into the Void’ – solely for John Garcia’s alternate lazy, stoner-influenced vocals.
Master of Reality received a huge amount of criticism when it first came out, as American journalist Lester Bangs proclaimed the album to be: ‘’naive, simplistic, repetitive, absolute doggerel.’’ – although it is hard to look past the fact nobody had attempted the sludge, stoner sound that Sabbath were producing and they were essentially ahead of their time. The subsequent influence of Sabbath’s sound in Master of Reality is almost consistently present in the genres of doom, stoner and sludge metal in the 40 years since the album was released. The likes of stoner and sludge artists such as Kyuss, Orange Goblin, Electric Wizard and Eyehategod amongst many, many others have taken elements from Master of Reality and built on it, which simply pays tribute to the legacy of Black Sabbath.


For Fans Of; (Any good music, ever)
Master Of Reality Deluxe Edition (320kbps)