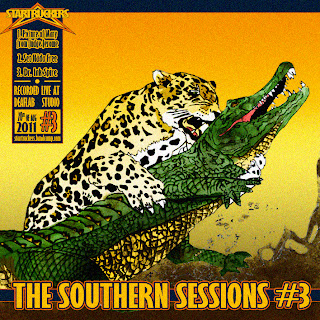 So I was scrolling through my iTunes and searching for bands to check back on as it were. Bands who's albums, EP's and demos I had at some point acquired a long time back and had some what failed to keep up with. Regrettably this was one of them. I'ld been sat on their second release The Southern Sessions #2 since shortly after it was first put up but just never got around to throwing it up here. Not to worry though, as they are back with this brand new offering, the aptly named The Southern Sessions #3.
So if you've already skipped ahead and let rip the track at the bottom you may well be surprised to here that these guys ain't from Alabama. Nope, not California, Texas, or Kentucky either. This motley crew of southern rockers are from... France. Yup, I was a shocked as you.

For Fans Of; Kyuss, Artimus Pyledriver, Queens Of The Stone Age, He Is Legend, Dust Bowl
Myspace • Facebook • Bandcamp
The Southern Sessions #3 (320kbps)