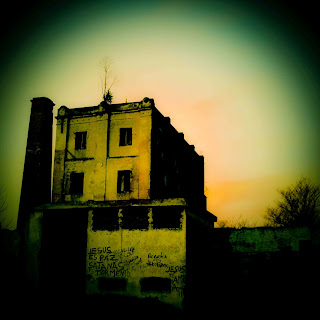 Firstly I should say a massive thank you to the anonymous tip off that I got about this new release from Ufesas.
I loved the self titled EP they released last year when I stuck on here a few months back so needless to say I was pretty excited to hear that more brand new material was up for grabs. Especially as that trying to find info about the band them selves has been about as fruitful as my search for rocking horse shit. None the less, its here so lets just be thankful for that.
So can you expect an extension from the EP of sorts? Well, yes and no. There aren't quite as many driving moments in the same ilk as previous tracks like The Destroyer or Goin' To The Mountain. Those sort of frantic moments have been reigned in a little to give way to a more sombre post rock kind of affair. Everything's taken on a darker, slightly sinister tone that the guys have really made work and captured in they're on way. It's quite a bold move, straying away from such an aggressive well executed pace to something entirely moody and down beat in comparison. The more I listen to it the more I feel that it really sits equidistant between prog and psych - distant and ambient yet equally trippy at the same time. That may sound like a bit of a handful but fear not, it works. Besides the main thing is that you can really hear a real growth from the band. It's clear that it wasn't a spur of the moment decision to alter they're style, it's obviously been heavily worked on and perfected.
If you loved the EP like I did you should really dig this second offering, even if it doesn't initially grab you stick with it and give it a couple of listens... I guarantee it will get you hooked.
I may be way off the mark but I think there maybe a possibility that the album will be coming out on vinyl through german label Droehnhaus. The only reason I'm assuming this is because they were good enough to press the bands two track 7" and on the art work supplied when you actually download this album the labels logo appears in the top corner as well as the tracks being listed as sided A and side B. Lets keep our fingers crossed because I'd love to be chucking this onto my turntable in the near future.