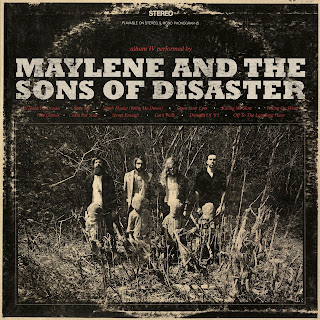 Unarguably one of the quintessential southern rock bands of the last few years, Maylene carved their way out of a sort of niche that some people who'd heard Underoath kind of placed them in. How exactly did they do that? Well, dirty groove filled deep south style riffs is the answer to that question. Now I love Maylene but the one thing that kind of gets to me about them is exactly the same thing that goes for Foo Fighters and The Subways. They just don't do 'heavy' enough. Don't get me wrong, all of those bands can do 'heavy', but thats just my point, they can do it, and when they do they do it epicly! Hell, just listen to tracks like Young For Eternity or the opening riff of Girls & Boys by The Subways. The Pretender by the Foo's or Bang, The Witch Is Dead by these guys. They have that awesome ability to create pure ferocity but it kind of seems that when they bring out an album half sounds like it was forged in the depths of hell, and oozes with phenomenal stomping riffs that could make a nun start air guitaring. But the other half is made up of slow ballad type offerings which just grind to a haul the entire pace of the album. What's worse is when they do this mid song. The best example of this here is probably the track Never Enough that starts of with such a vexed pace that you could imagine it being the soundtrack to you barreling down the freeway towards Alabama's state line in an old Dodge Charger being chased by the police. But then it quickly slows and kind of kills your buzz.
It's a shame really because with the opening track In Dead We Dream the album does start strong and like where III left off, gritty and angry. But then it just begins to feel like the whole thing has been over produced. Yeah you can here that the guys have progressed technically and even in the vocal department. But I don't know about you guys but thats not what I'm looking for from my southern rocks bands. Especially not with the track Open Your Eyes that sounds like 30 Seconds From Mars (or such like) trying their hand at a stoner rock tune. It's kind of embarrassing, to be honest.
All in all, there are some good tracks, but if you're expecting a Maylene of old you'll be bitterly disappointed. Sorry.

Email ThisBlogThis!Share to TwitterShare to FacebookShare to Pinterest
Labels: Maylene And The Sons Of Disaster, Southern Rock, Stoner, USA