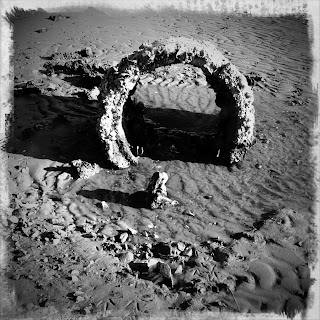 Back on the post metal train today. Well, sort of anyway. A thunderous clash where metal meets post metal would probably be more of a apt assessment of New York's Oceans Of Insects. They sort of straddle both genres for the best part. Keeping an upbeat typical metal dynamic while sneaking in a, for want of a better term, Hydra Head Records sort of sound. I cant quite put my finger on exactly what it is that makes them remind me of, say, early Cave In or Big Business but its there. Not so much in the vocal style but in the general make up of each song. But saying that, as the album progresses it takes on more and more unexpected elements and influences. From the opening track its easy to take away that aforementioned post metal view but as track two Sandcrawler kicks in you're met with humongous waves of what I can only describe as speed desert rock riffs. Then shortly after the tempo's dropped down and the harmony's picked up with a real sort of Incubus feel. Probably not to all your tastes but for those of you who do enjoy the vocals stylings of Brandon Boyd then you're in for a treat... For the next couple of songs at least, because once again the pace is picked back up and each track is interspersed with a slightly more aggressive stance... with a slight hint of space rock. Not really in a musical sense (I know that sounds weird but bare with me), but within the use of samples and mild drone. Which actually works really well to produce a pretty eerie dark psych sort of vibe that pretty much bookends the whole album. I for one am really digging it, and as its available at a price of your choosing so what more incentive do you need!?
~ Jay