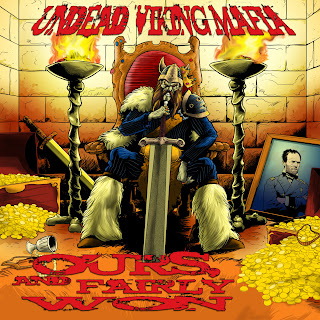 The great band names just keep rolling in this week as we return to Atlanta for another collection of thundering tracks from the guys who kicked off the blog at the very start of this year. Yup, UVM are back to their old tricks with a brand new EP, which hopefully is serving as a precursor to a new full length album, because every time I listen to these guys I'm always left yearning for bloody more. No difference with this latest outing either. Like Clutch meets Maylene, the crushing formular is once again a winning one. Following the single track release back in June for Vipers & Charlatans I kinda got the feeling the band were straying into slightly different waters. Sounding a bit more Black Label Society than much else, all the pinch chords and Zakk Wilde kinda fret work sort of left me on the back burner a bit. But where my faith was once shaken this little three track EP quickly quashed all doubts. Sounding a whole lot more focused and in some places slightly more tortured, each track feels like it's taking it's main influence from a different genre; Last Call - stoner, 500 Year Scotch - hardcore, Hello, My Carcass - southern rock. I love the idea, and because the guys can actually pull it off it works brilliantly. I just hope I'll be able to say the same when the next full length albums drops...
I'm pretty sure it will.
~ Jay