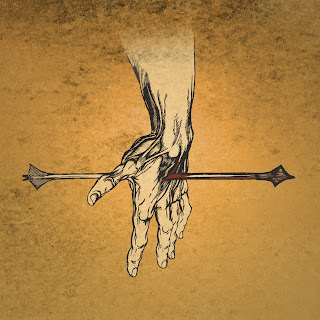 The kings of DIY are finally back with a full length studio album and I could honestly not be anymore excited, seriously, feel these nipples!...
It's been a whole 18 months since the Aussie trio unleashed the biblically crushing Real Pain Supernova on us, but to their credit they never forgot about us. Back in march they raised the cash to put together their first 7", Rope/Pussyfootin' then in September they some how managed to find the time (between driving over 5500km and playing 20 shows in 30 days!) to knock together their first cassette The John Dominance Tapes. But that does kind of beg the question, where the hell did they find the time to get back in the studio!? Nonetheless, we should just be thankful that they did because The Golden Bridge is nothing short of utterly blinding. If you've yet to discover No Anchor but love your post metal a little on the unorthodox side then this will tick all the boxes. But do expect something a little different from the previous LP. Where Real Pain Supernova was as focused and chaotic as a 'fundamentalist with a coat full of semtex' The Golden Bridge is slightly more naked psychopath with a head full of bath salts. Both have the same brutal result, but the latter is just that little bit weirder and unnerving... It's almost defies explanation really. It's heavy, its fuzzy, it's methodical and in some parts it reminds me of Joy Division... But I'm not entirely sure if that can be attributed to the whiskey I've been downing for the last 3 hours.
It's rare that I urge, nay, beg you to go buy an album but when it comes to these guys you're severely fucking up if you don't. The chaps work their absolute nuts off and their love for the music shines through every aspect of their writing, recording, playing live and creation of the hand made merch more evidently than any band I've ever encountered. Their are few more worthy of your hard earned bucks then this bunch.
The deluxe version of the vinyl sold out in the blink of an eye you can however still pick up a good ol' black one or lovely bone/red mix... Lovely stuff!
~ Jay