Defenders Of The Universe?... 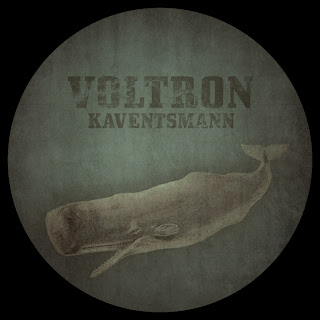 Since time began you've always been able to rely on the Germans for certain things; Punctuality, efficiency, questionable pornography and heavy industrial tunes. Oh, and a bizzare appreciation for David Hasselhoff, but I'm not prepared to really pull at that thread, so lets just stick with the heavy tunes part.
Hailing from the countries capital, Voltron formed back in 2002 and began life as a trio. Picking up additional members over the years only proved to really strengthen their sound. Building off a foundation of unorthodox industrial riffs and beats the guys now sit more comfortably within the confines of post metal, forging a sound more reminiscent of say Cult Of Luna or early Neurosis. The album begins deceptively gently before being swiftly kicked into overdrive and resonating with a down trodden thunderous anger. The ferociousness is dished out pretty copiously, even within the tracks that serve to bring down the tempo to slow mellow churn, Kato's vocals still bellows mercilessly in the foreground. With this in mind and coupled with the mix of slow and fast paced chugging you'd expect the album to slip into the realms of sludge right? We'll to be honest, in typical German style, the execution is somewhat clinical so it does manage to remain quite detached from that particular label. Which if you ask me is for the best, because it's clear the guys have honed and perfected the musical route they wish to follow and its clear that the choice was a good one.
If you hit up their Bandcamp page you'll be able to pick up a lovely diy version of the album on CD, and for the low low price of just €10, its a pretty good bargain too.
~ Jay

For Fans Of; Cult Of Luna, Nasum, Neurosis, House Of Low Culture, Year Of No Light