Blackened Doom for the Soul... 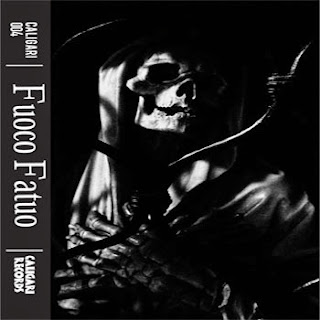 Fuoco Fatuo is a Blackened Doom Metal band from Varese, Italy. Their release "2 EP's in One Tape" is exactly what it sounds like. They recorded two separate EPs back in 2012 and have gotten around to putting them both on cassette. They play a type of Doom Metal where their Black Metal influence is at the fore front of their sound. From their raw, harsh, guttural vocals, to the passages of blast beats and speed guitar. I would imagine if you're a fan of Black Metal, you're going to feel right at home here, even when the Doom takes over for extended periods of time.
The first of the EPs is called "EP 33 Colpi Di Schizophrenia Astralle Nell'Abisso Nero", but we're going to call it "Numero Uno" for short, and it starts off the tape lasting 5 tracks from "Alpha" to "Omega" (clever, right?), and it could almost pass for a straight up Funeral Doom EP, even with the bits of Black Metal snuck in all over the place. After the intro track of "Alpha" you're dropped right into the thick of things with "Vuoto Nero", and an avalanche of cymbals before things start to slow down into a feedback laden drone sound, after a few seconds things take another turn into fun filled blast beat section before finally settling down into a slow moving Doom sound that we all know and love, just with those Black Metal-esque vocals on top of it all. The outro for this EP "Omega" is a cool little acoustic piece, definitely a good closing track for the EP, or in this case more like an intermission.
The next EP, which is self-titled, starts off with the track "Dentro L'inferno" and it's almost nothing like the "Numero Uno". Where that one had Funeral Doom and Black Metal written all over it, with this one someone spray painted Black Sabbath all over that. From the very beginning it's all Doom Metal, up front and center, with Sabbath-esque riffs running the show and about all the Black Metal you get are in the vocals and the occasional, break-away, raw Black Metal part in a track. The next track "Ley Nera" almost starts off in a Stoner Doom Metal fashion, with drums blazing. When the riffs and vocals drop, they bring to mind earlier Church of Misery, and it's awesome, of course this only last so long before their Black Metal starts showing through again. This was my favorite part of the whole tape, and would make it well worth buying the whole tape just for the last four songs.
Now, you can stream the tape, in it's entirity, to your heart's content over at the Caligari Records bandcamp, who also have the tape for sale in their store here. Now, to get news from the band Fuoco Fatuo and their unique styling of Blackened Doom Metal, head over to their facebook page.
~Skip

For Fans Of; Evoken, Pallbearer, Ruins of Beverast, Forgotten Tomb, Church of Misery