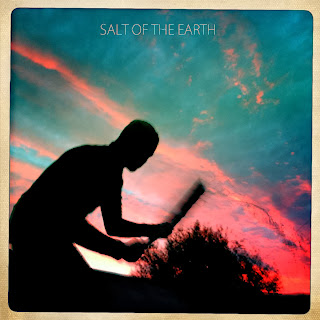 We've seen our fair share of, lets say 'unique' band names over the years. Undead Viking Mafia, Vintage Cucumber, Dickkicker, Battle Pope... The list goes on. But few have made me choke on my whiskey quite as much as Sweden's Shit The Cow. I've not delved into the origins of the name and don't really intend to, solely because I quite like retaining the mystique. But try as many have, a band can't travel on a name alone. That being said, I have had a long burning desire to start a band called Mongoloid Porn Inferno, without giving much thought to any kind of material or genre. Anyway, Shit The Cow and their Salt Of The Earth EP. It's just a short one at a total of four tracks, but goddamn they've made good use of 10 minutes. Diversity alone, these guys have really gone to town. Opening track The Decline Of Western Civilisation bursts and churns with a heavy southern rock fury right from the opening bars. It's truly one of the best opening tracks I've heard all year and instantly grabs you by the fluff of the scroat. Sadly it's a little shorted lived, but as the EP progresses it twists and turns picking up more and more influences with everything passing minute. The backbone of the whole recording falls very much within the garage rock side of things. The LO-FI tone playing a forever present part throughout all 4 tracks, dipping in and out of grunge and even a distinct hint of punk, predominately the west coast variety, to which, by my own admission, I'm not a authority on. But, to me at least it does feel like it plays out a bit like a 90's road trip up and down the US's Pacific side. Picking up subtle inspiration and nuances from the likes of Nirvana, The Melvins, Suicidal Tendencies, Fu Manchu, Black Flag and Mudhoney. It works really damn well, but I can't help but feel the guys have a real knack for the heavier, riff orientated side of things. Fingers crossed the next time they find themselves heading towards the studio they'll have this in mind.
~ Jay