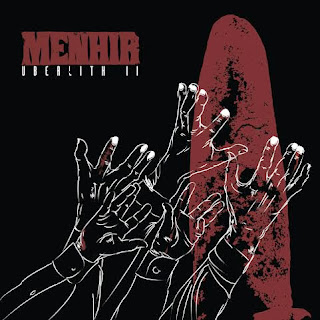 Hailing from under a monolith in The Netherlands, Menhir brings us their second offering of "Uberlith II EP", which is slated to be released tomorrow (12/13/13). Now, this isn't your typical Stoner Rock band, with double the bass players, they're just as fuzzy and heavy as your mother, but a lot cooler. These guys take the formula for Stoner Rock, then start adding in some Southern flavouring on top of the gravel filled vocals that sporadically come in some songs, while others are simply awesome stoner riffs with audio samples put on top. Comparisons with Stoner Rock heavyweights like the Truckfighters and Kyuss come to mind quickly once the EP starts up.
It opens up with "Mt. Aloha" and after about 45 seconds, you're assaulted with the twin attacks of absolutely blistering drums and fuzz bass riffs. Aside from the super heavy Stoner Rock jam, the audio clip accompanying all of this fuzz filled heaviness seems to meld very well, not something I'm always a fan of, especially not the midsts of a song. They use the samples almost as vocals, interlacing them throughout the entire track, and for one reason or another, it seems to work flawlessly for me. The next track "Buttcake" is a super heavy anthem of sorts, it starts with a solitary bass riff and then blasts into the same sonic assault as the first track, and more audio clips but this time with a howling chorus to accompany them. The bass groove in this one is absolutely killer, especially the solo towards the end of the track. My only real complain about this whole release is that it's just too short, I was left wanting even more.
Now, it isn't out yet, but I'm sure you'll be able to pick it up over at the group's bandcamp page where you can stream the first track "Mt. Aloha", also have one of the best, proper Stoner Rock videos of the year up over at youtube, so go give that a view or two while you're waiting for tomorrow to roll around.
~Skip