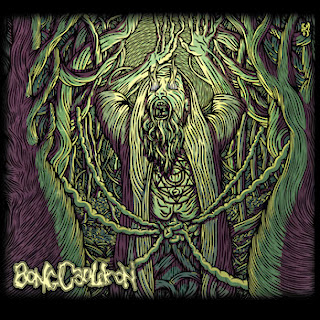 Lazy Monday mornings call for some intense stoner metal, is what I always said. This week's fine offering comes from the fine fellows in BongCauldron, a trio from Leeds who will unleash their killer EP on the world next month. A speed bag-paced trip mastered by the band in what I imagine was a hazy dungeon of six-foot-tall standing bongs and naked women, BongCauldron possess the sound of veteran acts that have put the genre on the map, but add a bit of toughness that blends with the music well.
Right from the get go, you are brought into familiar stoner territory with "Tree Wizard." A long tone of feedback opens the track and quickly lends itself over to heavy riffs and noisy drums. However, once the vocals of bassist and guitarist Corky and Biscuit kick in, the sound jumps into another realm. The gruff, raspy barks and equally harsh backing vocals work perfectly around the lyricism of the song, as well as serve as a nice dichotomy with the hellacious and blistering solos sprinkled throughout the track.
"Pissed Up," presented as somewhat of a single off of the EP, clearly wears the pants on the album, smashing through your speakers like a battering ram against a door in a drug raid (the humanity!). Breakdowns and booming chords are the norm here and are unrelenting. Staying away from the chug-a-lug formula that would serve so simply on such a song, the band instead adds moments of slow build-ups and sludgy segues that hit your chest and rattle around your ribcage for a while.
Blast metal elements pop up in tracks "Vehemence" and "Gauze Rite," creating thrash masterpieces on either side of the lengthy "Gimp Jig." Probably paying the most homage to classic stoner metal stylings, "Gimp Jig" transitions between thick guitar and amp pops as slowly as rising smoke. The vocals scale back just a little here and see a bit more of a sing-song pattern, albeit with a hardened exterior. Not failing to show off their talents as musicians, the band also puts their best solo efforts and chord progression to the forefront at various points, sometimes overlapping and never taking their foot off the accelerator.
Seeing as 2013 is just about over, do yourself a favor and make BongCauldron the first great stoner opus you listen to in 2014. Those interested in a physical manifestation of the EP (gatefold CD) can pre-order it here. Those who pre-order will also receive an immediate and free download of "Pissed Up." Those wishing to just check it out right this fucking minute can head over to Terrorizer for a full, exclusive stream.
~Joe

For Fans Of; Bongzilla, High On Fire, Unpersons, Salem's Pot