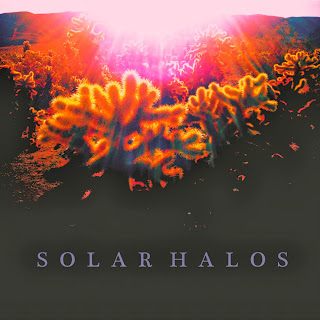 As 2013 nears it’s end and 2014 is on the horizon it seems only fitting to prepare you for the greatness that is Solar Halos self titled debut album, which will see the light of day January 20th next year, in multiple formats via Devouter Records. For those of you who are doom/sludge enthusiasts Solar Halos feature some former members of Horseback and Fin Fang Foom so you know going into this that expectation is high! You will not be let down, this is a monumental piece of art! So, with that in mind, lets get on to the songs, because they are HUGE!
We start off with the massive The Vast White Plains, a sludge/doom delight. The drum work beautifully pulls you in to Nora's vocals which are equally perfect and utterly haunting. Moving through the release the bar keeps getting raised, for instance, on Tunnels the rhythms become more driving and pull the listener into the song. The play between the instruments is flawless both tonally and atmospherically. I often find sludge and doom lyrical material to lack some genuine heart and soul but Solar Halos is one of the few in recent years I have heard that is not just believable but tugs at your heart strings in an unexplainable way. Honestly every track on this effort has something special to offer both in mood and colour. Wilderness for example sits as a calm dark bridge between the albums moods and is at time reminiscent of Panopticon era Isis, which lets face it, is a compliment and a half. You sway and move with the flow right into the albums closing track Resonance which is a massive wall of throbbing feedback, noise and rhythm driven by the snare and dirty bass lines. This song marches and chants full boar into an explosion of brilliance!
This is by far the best record I have had the privilege of being sent since starting here, and one that certainly will remain in heavy rotation for quite some time! FANTASTIC!
The whole album isn't available until late January, but until then treat your ears to the bands 2012 demo...
~ Stephen