Sleep When You're Dead... 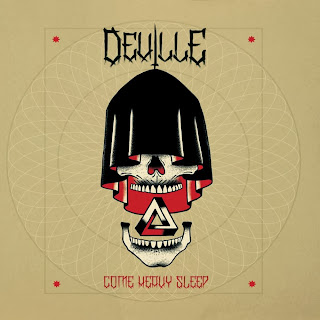 Come Heavy Sleep is the first album from Deville (originally released in 2007 by Buzzville Records, and newly reissued this year by Heavy Psych Sounds), and it kicks off with guitar strained through a filter of fuzz, hard rock drums, and desert rock vocals. Over the course of the album's ten tracks, they ramp up to a big finish, showing off their chops and a deep fondness for the desert rock that rose to prominence in the late '90s as they plow their way through the songs. It's dry, rocky, and gritty, and the singer sounds like he chews cigarettes instead of smoking them. While the Penrose triangle and spirograph art of the cover would have you think otherwise, there's not really any traces of prog to be found, aside from the standard light leanings towards psychedelic traces that marks most desert rock; these guys have more interest in getting just the right tone out of their amps and building up big, crunchy riffs than messing about with polyrhythms and time signature shifting. If you've just about worn out your copy of Kyuss' Welcome To Sky Valley, you might want to consider picking up a copy of Come Heavy Sleep to help take the load off.
~ Gabriel