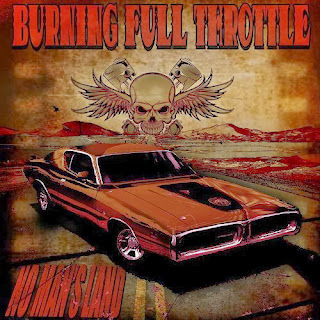 Burning Full Throttle is a 4 piece Garage/Stoner Rock band straight out of a dirty garage in Hungary that formed in 2005, but went on hiatus shortly there after only to go back to work in 2010. Now in 2013 they've re-emerged with "No Man's Land", 8 tracks that bring to mind biker bars and muscle cars instantaneously.
The opening track, "The One to Blame", opens up like a Stoner Rock classic should, with shredding distorted guitars. The opening riff reminds me heavily of bands like Fu Manchu and Artimus Pyledriver, with the whole thing being ripe to be used in a cinematic car chase. The next track "No Man's Land" would seem to be the prefect title track, it fully encompasses the sound of the band and manages to fit all of that into a single song. Opening up with a slightly fuzzed Blues riff, which is quickly joined by a swinging rhythm section, and some oddly melodic, dirt-road vocals. This one is truly a headbanger all the way through. The third track on the album, and my favorite off the whole thing is entitled "The Flight". It opens up with a killer riff, that quickly escalates into a heavy Southern Rock song, with those same melodic, gravel filled vocals, belting out a catchy as hell chorus. Now, those are just the first three tracks, the rest are equally as good, even if some such as "Downtown Paradise" and "Why" take a different approach to the same formula, super fuzzy guitars, in the true spirit of Stone Rock, with cleaner vocals than the earliest parts of the album.
Now, according to the band there will be CDs available sometime, but until then you can check out their down and dirty album over on their Soundcloud, where it's streaming in full. You can also head over to their blog for any updates. This release should make a pretty good party album for all of those upcoming New Years get togethers, play it loud enough and you can even drown out all of those annoying drunks.
~Skip