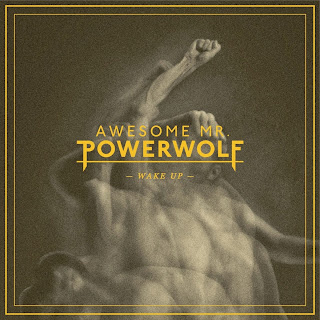 The Awesome Mr. Powerwolf is a 5 piece Retro/Blues Rock band from Copenhagen, Denmark. You may of heard of these guys way back in 2008, when they released a rough demo entitled "Let's Make it a Friday", but soon became inactive after that, but now they're back with a vengance, after adding three new members in 2012, with their first proper release of the four song EP "Wake Up".
The title track "Wake Up" is what starts us off, and it immediately kicks in with twin guitars going full steam ahead, '70s style. Everything about this track screams Classic Rock, but in a sleeker, newer packaging, and it's not a bad thing. The second track "Blackout" opens up with the same sort of trademark twin guitar attack, and toe tapping riff. This one has an almost Sabbath tinge to it though, just around the edges, which is more than enough to make a song killer. Probably my favorite of the four tracks, the next song "Love" starts off in a slightly more Southern Rock fashion than the first couple, with a much more Blues influenced riff and vocal delivery accompanied by a plodding bass and drum groove. This song is one of those that you don't mind listening to a few times in a row, from the awesome riffs, to intricate, distorted and clean solos, there's nothing to dislike about it.
All in all, it's a really solid EP and first release, with each song having it's own different sound, vibe if you will, and it leaves that taste in your mouth for more. Then with just 3/5 band members just joining last year, it really is amazing how tightly this band plays, excellent musicianship is a given, but it's hard to replace what seems like good group chemistry. Now, to sweeten the deal just a little, head over to their bandcamp and get the EP in a name your price deal, you have nothing to lose and a killer piece of music to gain.
~Skip
For Fans Of; Witchcraft, Thin Lizzy, Judas Priest, Zed