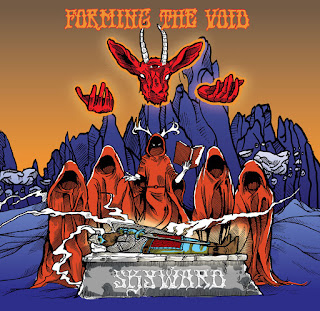 It's been almost two full years since Forming the Void debuted with their self-titled release, and now they're back with this new album, the longest yet in their catalog.  I have to admit, the cover art had me grinning even before I fired up the music, but once I did that, I knew I was in for a treat.  FtV start things off with the title track, a piece which carefully assembles layers of riffs and reverb for a couple of minutes before switching up into harder and crunchier coatings, and eventually a knotty lead guitar run setting its own rhythm against the bass and drums.
Things continue in similarly high fashion from there, and since there's only five tracks (though all nice and sizable at 6+ minutes each), I'll go ahead and pick 'em apart for you readers.  "Three Eyed Gazelle" is the next tune, making its heavy stoner rock power evident from the first wide-amped notes, with a persistent bass-line that practically throbs through the woofer and some subtle desert rock DNA to the sprawling song-writing.  After that, "Saber" picks up with a rolling back-and-forth rhythm from the bass, deliberate stretching of the guitar's tones, and a sharp counter-point from the drummer as the vocals slide into post-grunge mode.  Slick use of phasing/flanging later on, along with some restrained psychedelic melting, give this track some of the album's most otherworldly vibes.
"Return Again" comes next, bringing a comparatively chill atmosphere, at least until the heaviness breaks back in with a vengeance, and going even more desert-baked with the guitar tones.  For a track with so much yelling and crashing weight, it comes off as a song with a lot of thought behind it.  Lastly, "Sleepwalker" arrives with a moody reservation to its opening section, ramping up gradually into something both spacy and firmly earthy, and hitting a fine balance between the two impulses.
The five songs achieve a great flow through the album, making for an experience that keeps changing things up even as it pulls in previous elements.  It's one of those albums that just begs to be heard again and again so that all of the little details can get full appreciation, earning strong recommendation from us here at TBB.  Check it out, give all of the songs a try, and let it settle into your brain.  Then listen to it a few more times.
~ Gabriel