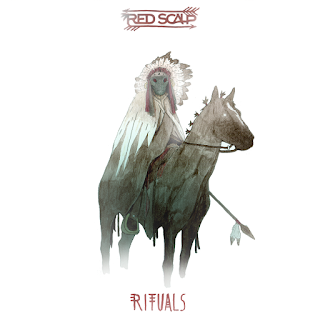 Following up on their 2014 debut EP, the Polish group of Red Scalp have now returned with their first full album, packed with six songs of rambling but tight-riffed stoner rock.  Quickly launching off after an introductory sample, the album soars off with massive-sounding strings swaddled in fuzzy blankets, soon joined by similarly-treated vocals and grounding percussion.  Spacy, expansively psychedelic tones and pedal effects drench the music, with phasing, wah-wah, and big-sky reverb just a few of the tricks in Red Scalp's bag, used to add some extra flash to the impressive base-line grooving conjured up by the band.
The vocals fit in just right, pulling the charismatic whole-heartedness quality from traditional '70s heavy rock, without picking up too much of the cheesiness that tends to stick to those when attempted by modern bands.  The playing by the individual musicians has some of that same magic to it, with each getting spots to show off their own fire, and all of them pulling together to swing out hard unified licks and beats.  The first four songs in this vein lead up to the title track, a ~20-minute monster of slow build and heaviness, followed by the quick closer of "Revelation", and all six come together to make a damn powerful first album, full of hooks and sweet technique.  If you've been on the search for some heavy rock with some real fire behind it, this should do you right.
~ Gabriel