Grooves From The Desert... 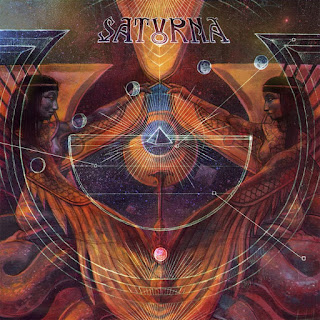 Hailing from Barcelona, Saturna mix groovy desert rock riffage with trancy, trippy heaviness to excellent effect.  There's not a lot of fault here - the vocals are delivered with such gusto and passion that it's hard not to enjoy them, the rhythm section gives the songs a rock-steady basis, and the riffs in particular are excellent.  Throw into the mix some genuinely very good guitar solos and you end up with a recipe for some damn good heavy rock.
Saturna balance straight-up heavy retro rock with a deeper, darker underbelly that often threatens to spill over into the music but rarely does.  This psychedelic undercurrent gives the songs a sense of creative friction and elevates them to something more than the sum of their already very good parts.
If comparisons had to be made, the heavy stoner and desert rock of the '90s comes to mind more than the often tighter, more regimented riff rock of the '70s - though there's certainly an element of that.  Saturna have influences - certainly - but on this album, that's just what they are; influences.  There are clearly reference points here (the scuzzy desert-doom of Kyuss, for example) but Saturna never feel derivative, which is refreshing and actually somewhat unusual.
In their self-titled album, Saturna have proved themselves to be a stoner rock band well worth watching.  This is an album of well-made and well-played heavy rock that really can't argued with.  The songs never feel simplistic, and more melodic songs like "Leave It All" give some lighter, but still rocking, relief from the more raucous moments.  This is an album that should be given a good chance if you enjoy heavy desert rock.
~ Martin