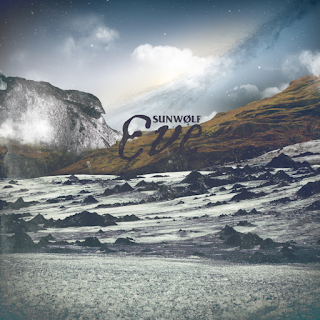 Sunwølf's latest album is the first released since the departure of long-time drummer/pianist/glockenspielist Dominic Deane from the band, as well as being the first recorded in the new Sunwølf Studios (for the full story, check out our interview with band-leader Matthew Carrington from last week).  Named for Carrington's new daughter, he described Eve as having a more positive and hopeful tone than prior Sunwølf albums, though he affirmed that the heaviness was still there in force.
As the album begins with "Gilded Heart" and a careful layering of acoustic guitar strings, that freshly-tapped vein of tenderness is quickly evidenced, though it's almost as quickly tempered by the arrival of harsh vocals as the intensity and volume of accompanying instruments rises.
From there, the album keeps trying new ways of unifying disparate elements, with somber chanting tied to keening electronics ("A Rest Mid The Gloaming"), folk-style reminiscence with near-thrash drum-beating ("Quell"), and so on.  It's an album that seems to be testing its own boundaries and expectations with each new track, finding ways to twist through the borders and find new emotional landscapes while leaving a clear trail back to where it began.  As such, it feels a bit odd for the release to come in spring, as I suspect this album will, as with most of Sunwølf's output, benefit from the sort of weather that leaves frost on one's windows.  Then again, there's so much overturning of standards and other actions that could be posed as birth/rebirth metaphors that this season fits it just fine.
Eve will be officially released in two days (assuming you're reading this on April 16th, 2016), with a bonus track included for the first 100 orders (and you can also snag a T-shirt with the album title's logo, if you want).  Once you've got a copy, be sure to clear out your plans for the next hour, as this is one where you should really turn the lights off, lay down, and give it your full focus.
~ Gabriel