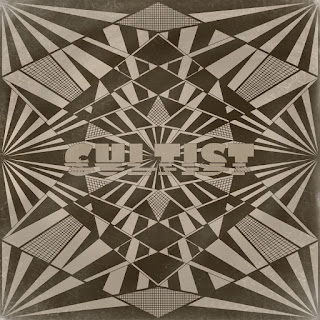 With members of Skeletonwitch and Howl behind the formation of this heavy stoner rock band, Cultist has an unusual lineage lurking behind their debut EP.  With nearly a half-hour of material to it, the five songs of Three Candles balance tunefulness with thick fuzzy riffs for potent results.
The opening title track has something of a Blood Lust-era Uncle Acid vibe to it, with raw guitar tone cutting its way through the bountiful fuzz while the vocals wail on in obscurity.  The songs which follow use a comparable formula, though they veer further away from those psych touches and more towards regular modern heavy rock and traditional heavy metal worship in their execution, with doom influence bubbling up from the bass.  Strong rhythmic force and catchy riffs are a component of each one, some slammed harder than others, and there's a good sense of cohesion to the hot-amped chords and well-beaten drums.
As a first release, it's a firm start, likely to draw people's ears past the backgrounds of the band's members and on into the sounds they've crafted here.  Good hooks, lively playing, and buckets of fuzz add up to a set of tunes that should earn plenty of repeat plays from those who pick up a copy, and while the EP is currently digital-only, it's easy to imagine this popping up on vinyl in the near future.  Check it out now, though, so you can get started having fun with this Cultist.
~ Gabriel