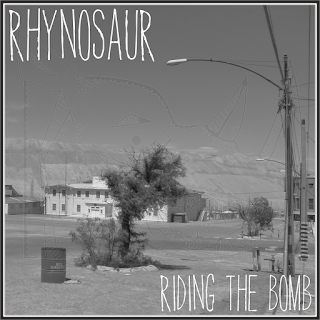 This is the second release to come from the German group of Rhynosaur, following their debut single "Accelerate" by about a year.  This time around, the band brings five tracks of garage-vibe stoner rock with a dusting of desert rock to their dry-fuzz ampage.  Rolling bass riffs and flexible drumming provide a solid punch to the low-end, while the vocals range higher and provide most of the humor, as with the opening lyrics of "Zombies" ("People 'round the world / Gone all insane / All fucked up / And wanna eat your brain").  Snazzy, free-handed guitar-work jumps in and out as needed, and the songs manage the balancing act of feeling open to improv without losing their way, showing some cool rhythmic change-ups along the way, particularly through "Skull Crushing Fungus".
The five tracks flow together really well, moving from mad to chill easily and finding ways of tweaking the sound to give each song a distinctive feel of its own.  Trailing off into silence at the end of closing track "Parcheesi" (and yes, they do manage to make an effective rocker out of Parcheesi, somehow), the EP brings the band out in strong force, and should have some broad appeal to fans of laid-back stoner rock.  Stay tuned for more from this crew.
~ Gabriel