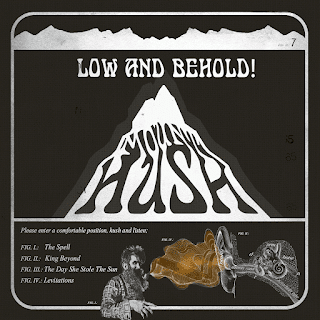 Low and Behold! (aside from being a great stoner rock name) is the first EP to come from Switzerland's group Mount Hush, and with its four tracks, the band establishes their heavy psych-edged sound with good style.  Starting off with "The Spell", they bring together some retro grooves with motor oil in their DNA and smoke in their eyes.  Cool rhythmic interplay between the bass and drums gives the guitar a solid platform on which to show off some freaky streaks, and the vocals have a classic, instantly-familiar quality that helps everything mesh all that easier.
From there, it's on into "King Beyond", with more '70s style angled a little lower and heavier, and some inspired runs of guitar squeals studding the melody.  "The Day She Stole the Sun" strikes a moodier vein, though things are kept heavy on tone and timbre, as it rumbles through its changes.  Lastly, "Levitations" goes into a down-beat and subdued desert rock trip, with acoustic guitar and resonant tones building an atmosphere of reflection and wistfulness, and making for a smooth wind-down of the songs.
Mount Hush carries the retro rock bag with a hell of a lot more authenticity and creativity than half the acts mining that territory these days, and given that this is just their start, it's exciting to imagine where they'll go from here.  They've already got a split with Atomic Mold out on vinyl, including an exclusive live track called "Wolves in the Walls", so if you want to show your support for the band, grab one of those, a T-shirt, or even just a digital copy of the EP.  In any event, if you dig on heavy psych rock with a little garage to its sound, definitely check this crew out.
~ Gabriel