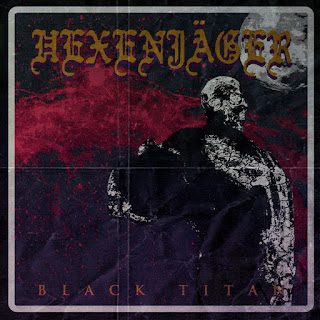 Last year, we heard from Hexenjäger with their demo, and now they're back with their first full-length album.  The unorthodox doom metal of that demo has matured into something with the same rough outline, but more muscle and riffage behind its heavy churning doom.  Each of the tracks have a nice length to them, leading up to a reworked version of the 20-minute song from their demo (now sadly without the torturous samples that once opened it) renamed to be the album's closing title track, and they get their main melodic thrusts across while luxuriating in the roominess by way of off-shoots, solos, and expanded tune-twisting.
Along the way, they manage to subtly fold in stylistic elements from psych rock, traditional heavy metal, blues rock, and a few other sources, stirring them into the doomy base to excellent effect.  The riffs are of that special variety where they just sink right into your brain, lodge themselves in, and feel as if they've always been there.  As a continuation of the band's demo, it shows them expanding their musical palette while honing their main focus, with clear indications of further goodness waiting to be released.  With a layout that's practically begging to be put out on vinyl by some savvy label (three on the A-side, the big'un on the B), keep your ears up and fingers crossed for this to make its way onto physical format.  But in the meantime, throw some money to the band and pick up a digital copy on their BandCamp, then play it loud and let it get deep into your system.
~ Gabriel