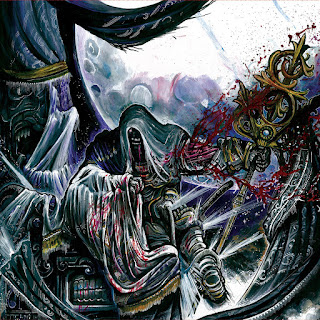 Following up on their self-released EP from 2011 (picked up and re-released by Head Records, Lost Pilgrims Records, and Throatruiner Records on various formats over the next couple of years), Verdun are now back with their first full album, being handled by those same three record labels.  The five tracks Verdun have put together this time around have a nice sludgy ring to them as soon as their titles are read, with names such as "MAnkind SeppUKu" and "Self-Inflected MutAlitation" (could be they meant 'Self-Inflicted MutilAtion', but who's to say).  If you're wondering about the apparently random capitalization, it's a minor easter egg that spells out 'Masuka Is Gone', a reference to the EP's title The Cosmic Escape of Admiral Masuka.
Now that all that set-up is, uh, set up, on to the music.  After a couple minutes of atmospheric establishment, the bass comes crashing in alongside the drums, making a suitable environment for the droning vocals and background yells.  It treads the line between doom and sludge in an interesting way, with the bass doomy and relatively clean in tone, while the guitar picks up fuzzy slack and the drums bring a flexible strengthening presence.  Generally speaking, things stay more on the doom side of the equation, but almost always with a lurking undercurrent of menace from the other side.
Each of the tracks also does an impressive job of building its own sense of character despite the similar tool-set used in constructing them all.  The choices of samples (most of which are Japanese, in keeping with Admiral Masuka) and semi-ambient texturing do a lot to help in this regard, but the main sections' rhythms and weighty implementation, along with some vicious vocal work in the second half, do even more.  By the time of the last track, "Jupiter's CovEn", they've got a melancholic drive behind the music as they sing of death and life.
The official release date is the 29th, but you can pre-order CD, vinyl, or digital versions at Verdun's BandCamp.  Verdun have really stepped up to the plate with this album, and their hard work shows in each track without pulling attention away from the sizable riffs and powerful momentum.  If you didn't catch their EP when it came out, this makes for a great chance to jump in at catch the group in excellent form.
~ Gabriel