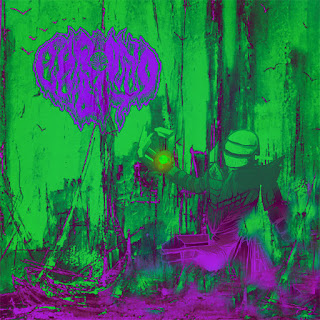 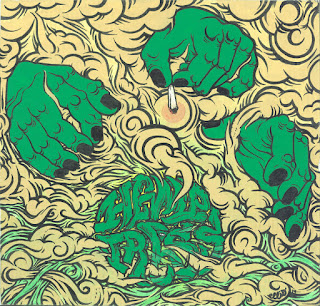 Two Canadian groups join forces on this split, with each of them contributing three tracks along with a fixation on leafy green substances and their effects.  Chronobot's side, the 'Trichome Trilogy', starts things off low and slow, with a drawling riff in "Mars Red Eyes" that picks up steam and distortion while heading for trouble in the form of monster reverb.  Things rattle on in strong form from there, with Chronobot's tracks laying down a heady path picked up by Hemptress with their own style.
On Hemptress' side, things pick up a little more hard rock flavor, but the stoner doom core remains firmly intact.  Belting out the vocals and cranking the chords out to match, Hemptress keep things heated for the duration of their half, diving into psych rips of guitar that capture their high energy for those who can't make it to one of their shows.
While both groups bring plenty of character to the table, I've got to give the titling edge to Chronobot, with "Mushrune" and "Hashteroid" rounding out their trio, while Hemptress go for more low-key names and wrap the split up with "Conclusion of Confusion".  The first run of cassettes has already sold out, but there's still vinyl copies available from Sunmask Records (also based in Canada, in case that factors into your shipping calculations).  Good stuff all around, lots of hooky riffs, and very well-suited to cranking up while filling your room with clouds.
~ Gabriel