A Long and Dreadful Road... 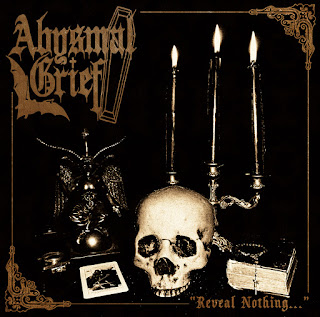 You might be forgiven for never having heard of Italian horror doom outfit Abysmal Grief, but with a catalogue as spooky and prolific as theirs, they're worthy of your attention.  As a collection of singles spanning 17 releases over 20 years, their new album Reveal Nothing works both as a best-of-the-best celebration of the band's long tenure of horror film-inspired doom and as an introduction to their prodigious body of work.
The cover art tells the story: skulls, candles, tarot cards, Bible, rosary beads, and tiny Baphoment statue.  Abysmal Grief draw on familiar iconography, but don't let that fool you into thinking this is a matter of style over substance.  Though there are elements of ritualism here—the use of gothic iconography, chanting, and spoken word interludes—these are mainly used to amp up an atmosphere of foreboding.  Unlike other works whose sole purpose is to evoke the feel of ritual (Ain Soph's Kshatriya comes to mind, another Italian endeavor), Abysmal Grief's primary commitment here is to the music, and these small touches are used sparingly.  Sometimes slow dirges build and invade your personal space; at other times, driving traditional doom dominates.  These songs are elevated by theatrics, not overshadowed by them.
The album opens with the only brand new song of the bunch, "Cursed Be The Rite", that serves as a primer to the haunting, chilly world you're about to inhabit for the next 78 minutes.  An organ reminiscent of The Phantom of the Opera sets the stage.  From there the tracks generally proceed in order of release, running the gamut from the slowly unfolding, funereal "Exsequia Occulta" to 2012's "Celebrate What They Fear", which features instrumentation and vocals that wouldn't feel out of place on a death metal release.  The organ is more than an affectation—it forms the spine of Abysmal Grief.  It plays a major role on every track, and as far as striking a gothic tone goes, it is pitch-perfect.  Although all of the instruments are played competently, the organ is the real star here.  I was also struck by the consistency of the production despite the wide swath of time these songs represent.  The album closes with a cover of Death SS's "Chains Of Death", a traditional doom song remade and repurposed by that ever-present organ.
If you've never listened to Abysmal Grief before, Reveal Nothing is the perfect point of entry for fans of occult-tinged doom metal.  For those long-time admirers out there, this is the dark homecoming for which you've been waiting.
~ Chris