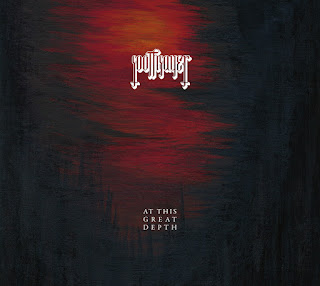 Soothsayer's sophomore EP At This Great Depth is an aptly named epic of just two tracks, occupying some twenty-four minutes. But those minutes are dense, cavernous, and varied. Despite its short running time, this album fills a vast amount of space.
Great cycles heave through massive atmospherics that give way to glorious heart-quickening blackened segments before slowing once again, soothing the unsuspecting before caving in on itself. With tracks of this length it's often difficult to have them cohere around a single melody or theme—either they're split into smaller tracks or they should have been. At worst, they bore the listener as they tread established territory again and again. Soothsayer thankfully avoid these pitfalls by crafting songs that respect pacing and proceed through sundry, seductive passages that always return to an establishing melody. Spanning sixteen minutes exactly, monolithic "Umpire" takes its time building atmosphere for nearly seven minutes before the curtain comes up and the wailing vocals finally break in, and shimmering guitars pick away above a rolling quake of sound. "Of Locust and Moths", at half the length, feels necessarily less expansive but tighter as a unit. Wordless chanting sets a dour stage that soon upswells and explodes out to fill the space that the previous track had carved out.
When a release is this strong I find it easy to nitpick. The drumming starts out uneven and oddly paced, and the album finishes with a riff that feels simplistic and uninspired compared to what preceded it. I don't feel I was given short thrift by At This Great Depth's short running time, but I was definitely left wanting more. In the end, these are minor complaints that are notable only in that they exist in the context of a work that is otherwise nearly flawless.
~ Chris