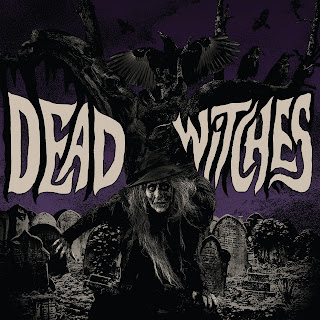 This debut album from Dead Witches brings together drummer Mark Greening (of Ramesses, Electric Wizard, and more) with vocalist Virginia Monti (Psychedelic Witchcraft) and newcomers Greg Elk (guitar) and Carl Geary (bass). With such a diverse set of backgrounds coming together, it's a pleasant surprise to find their instrumental rapport so solid from the start, as they deliver a firmly confident take on the usual stoner doom atmospherics, keeping the preoccupation with horror and occult fixings but seemingly uninterested in the chemical components.
Fuzzed strings, filtered vocals, and slow-groove riffs are the makings of the album, but steered towards the slower-paced traditional side of doom, instead of the more wild and psychedelic inclinations I personally favor in my stoner doom. Things feel a little too buckled-down and unwilling to take risks, while the vocal filtering tends to drain away the emphasis and vitality that untreated vocals could have lent the songs. At the same time, there's a respectable focus and coherence to the songs, with the band giving a clear demonstration of what listeners should expect to hear from them, and for a debut album, that's a nice thing to have.
I'd have to give my pick as peak of the album to “Mind Funeral”, which shows a bit more energy from the band than the other tracks; it's also the one they picked to receive a music video in advance of the album's release. In it, you can hear the growling bass and guitar supporting each other to nice effect, while Monti's growls and Greening's beats swarm up in almost-angry rattles to invoke negativity. On the whole, it's a slow-cooker of an album, but fans of the more somber side of doom may find enough to hook their interest and keep them tuned in until the group turns out their next release.
~ Gabriel

For Fans Of; Crypt Trip, Nocturnal, The Scimitar, Sons of Tonatiuh, Wizard Smoke