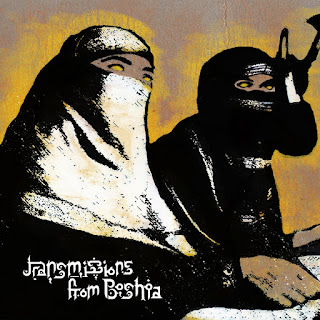 We last heard from Ak'chamel back in 2015 with their quick album The Man Who Drank God.  Impressions were pretty favorable, as the band expressed themselves in interesting and uncommon ways, and to be honest, I've kind of been wondering what they'd been up to.  I'm glad to receive signs of life with their new album, Transmissions from Boshqa, which again keeps tracks on the short side, though they break the three-minute mark more than a couple of times on this go-round.
The music maintains the band's intriguingly alien nature, not just from the eastern/aboriginal modes and usage of instruments beyond the guitar/bass/drums staples, but also thanks to the semi-lo-fi production and its strange meshing of smooth edges with strange head-space. The very acoustics are put to work in the efforts to unsettle listeners and guide them into the music's captivation, and the album as a whole has something of a hypnotic effect that made it difficult to analyze it for reviewing instead of just going along for the ride.
Like Ak'chamel's last release, this one's available on cassette, this time through the Artetetra label. It's certainly not an album for everyone (thank goodness), but those who are open to some unusual flavors in their music for bad times should be able to get some stirring stimulus out of it.
~ Gabriel

For Fans Of; Have A Nice Life, Mamaleek, Nurse With Wound, Opium Warlords, Wyatt E.