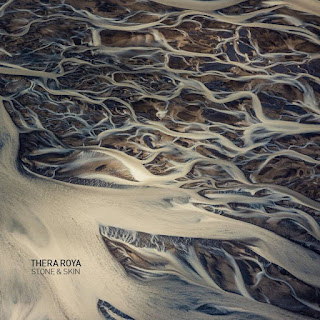 Brooklyn-based Thera Roya have been busy.  After several EPs and splits and near-constant shows in the last couple years, this trio is ready to roar onto the scene officially with their first full-length album, Stone & Skin.  As the name suggests, this is a work of dualities.  Vocalist Ryan Smith shifts between clean crooning and distant screams; guitars delight with both glassy tremolo picking and more traditional chugs; dreamy reverb meets trundling bass.  Their offering of post-sludge pays homage to some genre greats, but this effort is, in the end, all their own.
The album opens with a slow, sinister build-up leading ever higher and higher.  The expectation is for the world to end in a high-powered collision of sound, but Thera Roya surprises with something more subdued and thoughtful.  The rising edge gives way not to a deafening climax, but instead rolling drums leading to a haunting, catchy mid-tempo riff.  The melody is inviting while the production—open and spacious—keeps the listener engaged at a distance.  This reliance on riffs is the cornerstone of Stone & Skin and something the guys never stray far from, despite their self-ascribed 'post-' leanings.  These aren't highfalutin compositions with far-ranging meanderings down dark alleyways, but rather straightforward sludge jams with occasional forays into the conceptual space.  These ambitions are never more obvious than at the LP's middle track, "Hume & Ivey", which opens with audio from a physics educational film, circa 1960, called Frames of Reference.   "You're used to seeing things from a particular point of view, that is, from a particular frame of reference," the titular Ivey intones.  "Things look different to us under different circumstances."  While I appreciate Thera Roya's commitment to a theme, I'm not sure the rest of the track—a solid if unadventurous crunch of a song—ever quite reaches those lofty aspirations.  It's a satisfying listen regardless.
The back half of the album settles into something a little more subdued and instrumental: they've brought you into the fold, now it's time to spread out and explore the depths.  This is where Stone & Skin really shines.  The instruments, which to this point had by and large occupied different spaces, finally come together to produce a driving, meditative finish that feels earned.  Those who find themselves missing post-metal giants Isis would do well to avail themselves of Thera Roya.
~ Chris

For Fans Of; Isis, Cult of Luna, Rosetta, Neurosis, Pelican