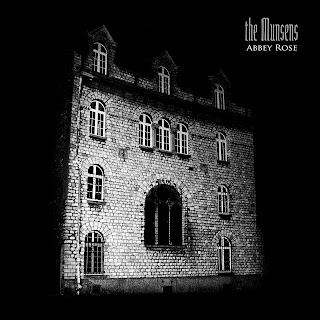 Having left fans in suspense since the release of their Weight of Night EP back in December of 2014, The Munsens are finally back again with Abbey Rose, a four-song EP running about forty minutes.  "You're Next" rolls things out into action with a smoky-toned bass riff, and as the drums rise to action, the song grows teeth, picking up swaying momentum to the rhythms and gnashing vocals.
The title track carries on from there with similar energy and instrumental style, taking a slip into tonal meditation towards its center.  Again, the band makes it flow right into the next track, "To Castile", before carving it into a new shape, this time of angry vibes simmering beneath the riffs' surfaces.  When that aggression does break free of its restraint, the band surges forward with it, driving and grinding down until the impetus is spent, and the chords slump back into restful recharging.  I love the way the melody grows back from there, finding new mood as the guitar goes psychedelic, and it only makes me want to see a live performance all the more, to hear how twisted things get in the improvisation of the moment.
Lastly, "The Hunt, pt. II" feels like a revisiting of elements from all the preceding songs, reworking their combination into something which caps off the experience in a powerful way.  The main riff is a real beast here, and the band rides it with fine style as they throw in tone garnishes and extra noodling.
It's an impressive EP (though I'm having a tough time not thinking of it as at least a mini-album), with the whole of it almost feeling more like one long-ass song split into four parts for easier consumption.  However you wanna look at it, it's some damn fine doom of a more serious bent than most modern doom bands (especially those in Denver, Colorado, where The Munsens make their home).  You can get it in digital or cassette form from the group's BandCamp page, so if heavy doom is something you dig, don't let this one slip past you.
~ Gabriel