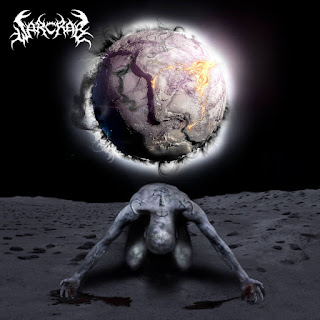 Last year brought a lot of surprises, both good and bad, but one that flew under my radar was Warcrab.  This six-piece band out of Plymouth, England, throw together a spiteful, heady blend of sludge, death, and doom in a way that grooves like a wave as it simultaneously crunches and cracks like an earthquake.  Scars of Aeons is their second full-length album and it's a thundering good time.  The production here is much improved over their first album Ashes of Carnage which struggled to contain the band's ambitions, the result being oversaturated and slightly muddy.  This album, in comparison, brings clarity without sacrificing any of the bone-breaking weight of three down-tuned guitars.

"Conquest" opens with a foreboding, atmospheric lead-up that does its job of quickly establishing the mood before mid-tempo drums and mountainous riffs take over.  Churning blast beats pick up the pace as it barrels forward, keeping in time with throaty growls and chugging guitars.  "Destroyer of Worlds" crushes, as its name implies, while "In the Shadow of Grief" slows things down to a more doom-like pace with occasional spurts of rolling energy.  "Bury Me Before I'm Born" chugs and squeals like a classic death metal song.  This is what Warcrab excels at: fooling you into thinking they're one thing while drawing on techniques and tempos of something completely different.  Set 'em up, knock 'em down.

At over 10 minutes long, "Scars of Aeons" is both the title track and the final, tumultuous climax.  The groove here is emotionally resonant in what feels like a mighty pay-off to the rest of the album.  The final moments wind down to a doom-speed crawl as the last chords ring in your ear despondently.

This is a short album, weighing in at a mere 34 minutes over 5 tracks, but it's capital B Big in every other way that matters: tonally, thematically, and musically.  More aggressive than your typical sludge, drawing on the intensity of death and some of the more riff-centric niches of doom, Scars of Aeons has a broad appeal that should please fans of those genres equally.
~ Chris