Drive Of Your Life... 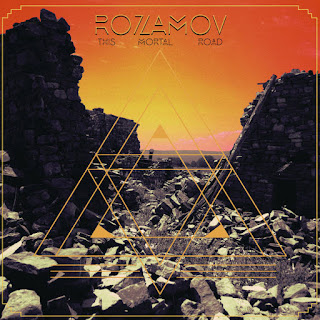 Boston-based Rozamov are back, following up two EPs with their first full-length, clocking in at forty minutes of epic and extremely well-textured doom. A 'progressive' record, as so many are these days, except this one never gets boring, while exploring a plethora of new and interesting ideas, similar to Elder’s breakout Dead Roots Stirring.
This release has a much, much heavier side to it, and it's one of the most exciting releases I’ve heard in sludge in a while. Anyone interested in the headier side of metal should check this out. Think earlier Mare Cognitium, with their high-concept stuff, or more recently, Inter Arma’s Paradise Gallows with more groove. The stand-out opening/title track This Mortal Road is a slow trashy sludge feast that trudges along, opening up with filtered vocals before dropping into a filtered riff of desolation. Production is on point the whole way through, but the drums are especially exquisite, sitting just in front of everything and giving the toms a meaty kick. Awesome effect.
Rozamov really excels in opening the listener up to a riff, letting it fester while adding texture and spacing, and allowing it to grow. The whole thing has a consistent build to it that is expanded further by fantastic vocals. Each piece segues effortlessly into the next, never feeling like a 'concept' record, but maintaining that consistent theme through the entire album. Really great stuff here, finally giving me hope in something for 2017. On tour now, go support 'em!
~ Dan