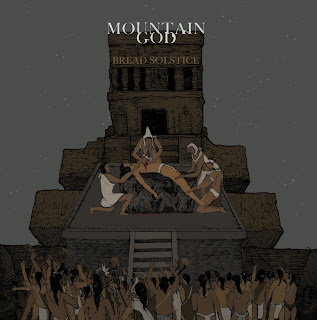 I'm having a hard time shaking the feeling that the name of this album is a tongue-in-cheek homage to the Spinal Tap-like 'metal typos' which used to be a lot more pervasive in the days before everyone had spell-check at the ready (“Clam Caravan” is the one I've specifically got in mind). And while Dread Solstice might have been a more evocative title, Bread Solstice arguably does a better job of capturing the weird, uncommon vibes that this band brings to their debut LP.
With a semi-subtle storyline threaded through the track titles, and launching off from the setting captured in the cover art, the album quickly establishes its brooding psychedelic tones as a melting morass of strange notions, sinister growls (both vocal and instrumental), firmly-built riffs, and the ability to pack enough force into their playing to knock your speakers into standby mode (at least, that's what happened with mine, and as many heavy beats and bass waves as my stereo's put out, that's still a first). You'll want to make sure your set is in good working order, though, so you can soak up the sonic malevolence this crew assembles with such seemingly untroubled skill.
Most of the music goes without vocals, leaving little doubt that they're working from firm foundations, but when the voices do come into play, it's usually as a veritable barbarian howl. And though the music drifts on the edges of abstract, the deep grimy grooves exert enough weighted momentum to pull listeners along in the wake, through the strangest moments and the most direct of head-banging invitations. A damn good album, even stronger when considered as the debut LP it is, and worth checking out for those who want their doom to go beyond '70s homages and heavy riffs. Copies will be available through Artificial Head starting on March 24th, so if you like what you hear, mark your calendar and set some cash aside.
~ Gabriel