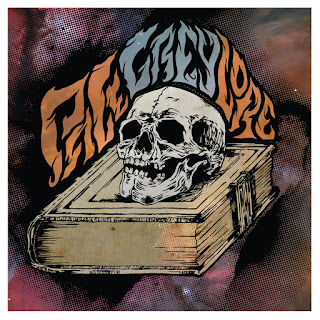 Though this album was originally released last summer, it's picked up some new attention with Kozmic Artifactz' plan to put out a vinyl release of it via their Oak Island Records imprint.  Given Kozmic Artifactz' reliable track record (no puns intended, I swear), it seemed worth our time to give a listen to these lads from Ohio. For a debut, the self-titled album has a nice, strong, confident stride to its style, from the opening track's brandished chords to the final moments of closer “Grave Future” and the trippy invitations it contains.
The music does a fun job of blending modern stoner doom with joyful '70s heavy rock tonality, with the beats and rhythms further swirling the lines between those two big influences.  Stuff like the southern-fried grooves of “Black Sun Rise” had me in mind of Mountain, for example, while the touch of Deep Purple, Blue Cheer, and Iron Butterfly can be felt in various other places in the album.  And like so many of those albums from yesteryear, the guitarist manages to give his instrument a sense of its own life, at times not so much playing as singing through its strings.
And the rhythms are similarly new but familiar, often managing to get my head swaying along within a few moments of kicking into the song.  While not exactly uplifting, there is a warmth and friendliness to the music that does a lot to help it quickly connect to the right spots for fans of heavy rock, and the details of the music are thick enough that on repeat listenings, you can either let yourself sink into the grooves or pick away at all the little things happening, depending on your mood at the time.  In any event, it's a damn good start for this group, and one which has me hoping to hear more from them in the near future.
~ Gabriel