The Pulse Of Water In Your Lungs... 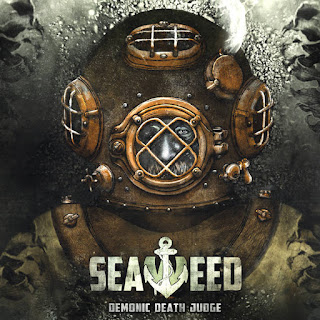 God damn this is heavy!  Extremely fantastic production, on par with Magrudergrind but aimed at groove as opposed to blast.  Speaking of groove, these guys have riffs for days.  Demonic Death Judge, hailing from Kotka, Finland, doles theme out like candy, one KO after the other.  This third full-length from the band is a ripper from the start, with the riffage amplified by vocals filtered through thrash, almost bordering on a crust-ish sound, but with way more atmosphere to it.
Opening track “Taxbear” rips into it in no time, bouncing back and forth between filthy vocals of pure sludge and a slow groove before mixing both into a toxic tonic, heavy on crash, with fantastic backing guitar eating into the octaves of the effortless glorious power that encases the entire thing.  Stand-out tracks like “Heavy Chase” show us a more sludge-rock-heavy Demonic Death Judge, keeping the mix in the red and vocals maxed, more accessible than the first track, but so heavy with attitude and power it prevents it from heading into something as “poppy” as Kyuss / Torche territory, while expanding on the ideas that those bands are pushing for.  This track also features one of the best and proper break-downs I’ve heard in a looonngg time.  This is a record that sucks you in and bowls you over to the point that every few minutes you just find yourself just saying “Fuck” out loud.
~ Dan