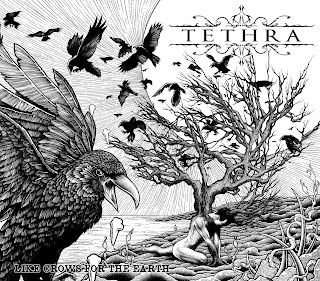 Italian foursome Tethra, following heavy touring and the release of their debut record back in 2013, are back with another foray into the dark.  Where Drown into the Sea of Life focused on water and the passage from life to death as thematic elements, Tethra take things to a more personal level on their new full-length Like Crows for the Earth, exploring loss and solitude through another symbol: the crow, a species that devastates any ecosystem it's introduced to, as a stand-in for humanity.

The most distinctive element of Tethra's sound, by far, is vocalist Clode.  No stranger to growls and death cries, this guy's real talent is his clean singing.  His bassy, syrupy voice sets the band's sound apart and should please any fan of Peter Steele.  Understated interludes haunt this album from the background--many of the songs feature lead-in tracks all their own and simply pick up where those leave off.  Most often leveraging acoustic guitars, but sometimes bringing in outside sounds (the sitars on "Deserted" are a high point), these quiet rest-stops feel melancholic and fragile set amidst the mid-tempo riffs, downtuned chugs, and guitar solos that otherwise dominate the soundscape.  When the bigger sounds crash in, all doom and gloom, they carry with them that establishing mood and give the greater work a moody, depressive slant.  "Subterranean", the stand-out of the album for me, has Clode crooning mournfully as twin guitars weave a matching melody.  It feels good to go big, but it never hurts to set the stage.

Fusing elements of doom and gothic metal with just a hint of progressive, Tethra is heady, dark stuff.  Intense and often soaked with emotion thanks primarily to lead singer Clode Tethra, Like Crows for the Earth will worm its way into your thoughts and stick there.
~ Chris