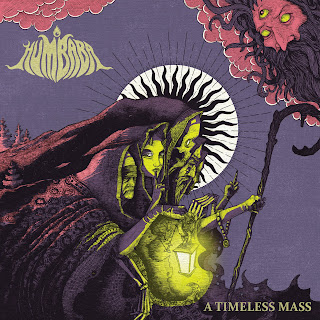 When we last heard from Humbaba, it was with their two-track debut EP back in 2014.  Given how much I enjoyed it, I was thrilled to find out that not only was the band still kicking, but that they had put together this first full-length album (with a redesigned band logo as a bonus).
Singing with clear energy and impact, vocalist Emre Can Serteli fits his musical element smoothly into the tapestry of beats, riffs, and sustained tonal flourishes drawn forth by the other three members, making for some satisfyingly deep tunes to envelop your senses.  There's also a nice wide range of styles put to use, from the general psych doom vibes of the early tracks to the '70s doom and Danzig-ish dark blues crooning in the title track (and elsewhere), or the smoky rumble and haze of “Shame On You Lazy Raymond”.
Each track gets time enough for the band to flesh out its ideas, slip in some tasty groove passages, and do some extra exploration, and it's fun to hear the group testing out their ideas while staying grounded in firm foundations.  The cathedral-like grandeur of final track “Lost and Fine With It” makes for a more-than-solid closer to the album, and on the whole, it does an excellent job of expanding Humbaba's sound while still pleasing those they hooked with that first EP.  Definitely worth checking out for any fans of warm (but not exactly mellow) heavy music; let's hope that it'll be less than three years before Humbaba unleash their next release.
~Gabriel