Within The Living Rock... 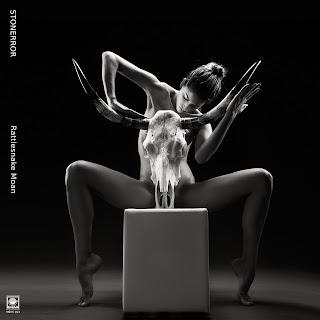 Rattlesnake Moan is the second release from this Polish quartet, coming a month after their debut with the title track single of this EP.  Over the five songs included, the band shows off their skills in a nice range of moods and styles, fusing them together into compelling tunes.
The first song, "Jericho", sputters into action on a cloud of fuzzy stoner rock (who'd have guessed from the name?) tempered by a fairly sober and somber atmosphere once the vocals slide into place among the chords.  From there, the band pours out the richness of their tunes with style and sweet grooves, including a cover of The Beatles' "Tomorrow Never Knows" that really makes the song their own, the chill desert rock riffing of the title track, "Wrath"'s deep-growl bass-line with counter-point energy from the guitar and vocals, and lastly, "Zombie Train" to rattle things along to the end on the wheels of bluesy, stony power.
The notes describe this as a "live EP", and if that's correct, then I'm blown away by how much control they put on display, and I've gotta say thatwhoever was working the recording desk deserves an award for the channel leveling they pulled off in that situation.  Most of the songs have that 'warm blanket' feel of great stoner rock that comes from all of the instruments' acoustics being allowed to soak into each other, with reverb rubbing against reverb and producing something more.  Big respect to the band for the showing they've put forth with this EP, and I'll be eagerly anticipating the release of their full album, whenever that might come.
~ Gabriel

For Fans Of;    Druglord, Fuzz Evil, Hemptress, The Munsens, Tuber