Right Out On Front Street... 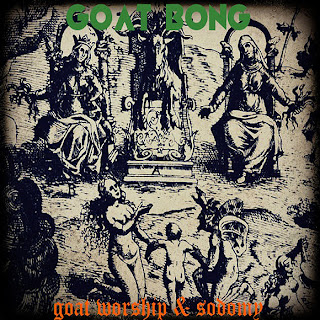 You've gotta appreciate a band that just tells it like it is. So when you're faced with an album called Goat Worship & Sodomy, you really don't put off listening to it, do you?
So here we have San Antonio's one and only Goat Bong. A stoner band name if ever I've heard one, I'm sure you're thinking the same. So with a name like that you should have a pretty good idea of what you should be in for once you click play, naturally? Well, yes and very much no. Firstly they're not quite as heavy as you may expect, thats in noway a criticism by the way, just that on the face of things you've got a few misleading hints, namely some dark ages inspired cover art with the words 'Goat', 'Bong' and 'Sodomy' on it. Usually thats pretty cut and dry, but not here.
Taking a somewhat unorthodox approach to the stoner genre as a whole the guys have firstly done away with your typical vocal element, which lets face it, is the usual factor that determines your subgenre. Instead being replaced with a healthy dose of samples, which gives you a little bit more artistic licence when it comes to the general acoustic dynamics of the band. Something that they've clearly reveled in when it came to hitting the studio here. Thrashing around in the pool of genres Goat Bong have managed to swing effortlessly in and out of the likes of sludge, doom, thrash, blues, southern and even desert rock, sometimes all within the same song. Which to me doe's sound great, even if it's a pain in the ass when it comes to trying to comparing them to anyone else. For others I know that it initially sounds like a somewhat reckless and haphazard state of affairs, but trust me when I say, some how these guys have got to bloody work! Don't ask me how, because despite listening to the album about five or six times from start to finish I still can't get my head round it. What I can say though is you really don't miss the vocals. Whether it's the use of samples or the shear mix of different styles fused together I'm not too sure, but it just seems to satisfy you enough and distract you from really caring that theres no front man. It's different and as far as I'm aware probably one of the most unique records I've been hit up with this year and well worth the measly $4 asking price. If you are a tight fisted arsehole though, Michael from the band has been kind enough to offer up download codes (what a gentleman!), you can hit him up here.
~ Jay


For Fans Of; Karma To Burn, Dozer, Uncle Acid & The Deadbeats, Elder, At Devil Dirt